GRDC stubble management guideline No. 13 – Herbicide application in retained stubble systems (click on the image to access this guideline)

Effective management of weeds in retained stubble systems is important because it means that growers can take advantage of the many benefits associated with stubble and residue cover, without suffering losses associated with poor weed control.

Over the last ten years farming systems have continued to evolve and this has changed the way we manage weeds, particularly in stubble retained systems. During the Millennium Drought stubble retention was widely adopted. When the drought broke in 2010, with a wetter-than-average season, stubble loads increased, challenging growers in terms of weed control in stubble residues.

With fewer paddocks being routinely cultivated, the weed spectrum has changed as certain species are longer being controlled by tillage. With the adoption of no-till farming, paddocks can be burdened with these weeds. Subsequently, more growers have adopted a chemical approach to weed control.

Effective management of weeds in these systems is important because it means that growers can take advantage of the many benefits associated with stubble and residue cover, without suffering losses associated with poor weed control. 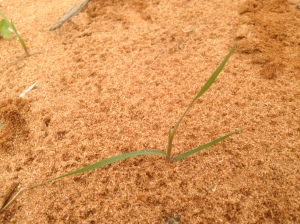 Certain weeds have become more problematic in stubble retained systems such as fumitory, tares and marshmallow. Bind weed is also becoming a problem. While these weeds are not widespread, and do not have herbicide resistance to date, use of ‘effective’ herbicides at the most appropriate time is critical.

Stubble creates a physical barrier between pre-emergent sprays and target weeds. Spray efficacy can be further reduced if the stubble has been flattened by machinery or grazing livestock. Pre-emergent sprays are particularly sensitive to stubble tie-up (where the chemical becomes bound to stubble and then unavailable). Under high stubble loads (more than 40-50% soil cover) pre-emergent herbicides become less effective.

The key things to remember are:

Herbicides that suit your system

With a heavy reliance on pre-emergent herbicides in cropping rotations which, particularly in low and medium rainfall zones are increasingly cereal dominated, it is important that we understand how various products work in our farming systems.

Adsorption is defined as adhesion of chemical onto the surface of particles; this may be stubble residue and or weeds. Sorption, on the other hand, is the physical and chemical process by which one substance becomes attached to another i.e. in the case of chemical being attached to stubble residue. Pyroxasulfone (for example) has a relatively low rating in terms of binding to stubble (Table 1). The less soluable the herbicide the more binding that will occur i.e. Trifluralin. Keep in mind when using products with greater solubility there is a requirement for rainfall to activate them and wash them into the root zone.

Weed burdens that result from maintaining stubbles can be managed by understanding how to adjust pre-emergent spray applications to better suit stubble loads. Consider:

Are different sprayers more appropriate? At the 2014 BCG Expo a panel discussed the pros and cons of tow-behind and self-propelled spray machinery. You can listen to the full discussion here.

To summarise, travelling faster when spraying will result in finer droplets, while a slower speed will produce coarser droplets.

Some growers have suggested that self-propelled booms do not perform as well as a trailing boom. This can sometimes be attributed to incorrect set up or selecting the wrong nozzle for the speed they wish to travel. Adjusting water rates and bar pressure in accordance with the speed you would like to travel can overcome some spraying issues.

Herbicide application in retained stubble systems is one of 17 key areas being examined through this project.

Disclaimer: Any recommendations, suggestions or opinions contained in this publication do not necessarily represent the policy or views of the Birchip Cropping Group (BCG) or the Grains Research and Development Corporation (GRDC). No person should act on the basis of the contents of this publication without first obtaining specific, independent professional advice. BCG and GRDC and contributors to these guidelines may identify products by proprietary or trade names to help readers identify particular types of products. We do not endorse or recommend the products of any manufacturer referred to. Other products may perform as well as or better than those specifically referred to. BCG and GRDC will not be liable for any loss, damage, cost or expense incurred or arising by reason of any person using or relying on the information in this publication.

Stubble project overview: This guideline has been developed for BCG Farming Systems Group as part of the Maintaining Profitable Farming Systems with Retained Stubble initiative, funded by the Grains Research and Development Corporation (GRDC). The initiative involves farming systems groups in Victoria, South Australia, southern and central New South Wales and Tasmania collaborating with research organisation’s and agribusiness to explore and address issues for growers that impact the profitability of cropping systems with stubble, including pests, diseases, weeds, nutrition and the physical aspects of sowing and establishing crops in heavy residues.