In the western districts the fallow period in cereal stubbles can provide an opportunity to grow biomass for forage and growers regularly plant millet or forage rapes to supplement livestock. Work done by Annieka Paridaen, SFS, has demonstrated that sowing long season canola varieties in late spring can provide up to 4t/ha of dry matter over the autumn period. The crops are then carried through to harvest the following summer with yields equal to or above traditional autumn sown canola crops.

The aim of this scoping study was to explore the potential of Faba beans, established into grazed unburnt stubble at an early and a traditional sowing date, to establish and produce a productive grain crop.

From the establishment data there is no significant difference in the establishment of any methods. NDVI, in the early sowing date, is not significantly different regardless of the methods used.SFS gratefully acknowledge the generous co-operation of Neil Vallance and family at this site. Many thanks to Swayne & McCabe for use of the Rapid disc seeder.

The aim of this study was to test the ability of beans to be established early with a delay of emergence as a result of the 100mm seeding depth. Establishing beans too early can result in increases in disease pressure with a subsequent increase in use of fungicides. Pre-emergent herbicide efficacy was detrimentally impacted by dry conditions resulting in strong competition from volunteer barley. This was treated with Verdict post emergent.

The study has shown there is potential to broadcast and cultivate beans into standing stubble as a method of establishing beans and treating stubble in the same pass. Getting the agronomy right for this system will need further investigation. Beans also established well with the 100mm deep direct drill method in stubble load of 2t/ha. If this is possible in high stubble loads (>than 5t/ha) this should be preferred as it will improve herbicide activity and weed control. 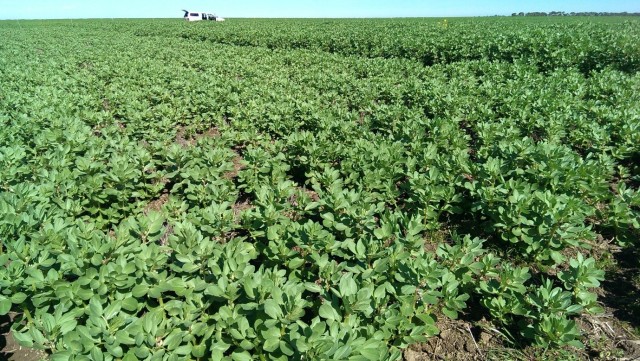 SFS gratefully acknowledge the generous co-operation of Neil Vallance and family at this site. Many thanks to Swayne & McCabe for use of the Rapid disc seeder.

2 Responses to Role of break crops: establishing beans in stubble